Hey, remember the 90’s? You know, Mr. Blobby, The Spice Girls, that sort of thing? Apart from crap novelty music and terrifying space blobs that passed as prime-time television, the 90’s was also host to great PC magazines. Namely, PC Zone which was where the world may have first heard of the writer and producer of Netflix’s Black Mirror – Charlie Brooker. Wait, what?

Yes, that’s right. Unbelievably (or not, depending on how much you know about the man) Charlie Brooker got his start writing scathing columns in the brilliant late 90’s / early 00’s PC gaming magazine PC Zone. Aside from the trademark Brooker snark, it also improbably featured a picture of Charlie attempting to eat his own arse. Even back then it was clear that his talent was exceptional – like a greyhound that had just broken free of its kennel, what Brooker was doing at PC Zone was special. Shortly after leaving PC Zone and after a few successful side projects, BBC audiences would be treated to the man’s work in the form of Screenwipe – a weekly show that lambasted the hideously stupid with Brooker’s trademark absurdist satire. It was a brilliant, laugh-out-loud piss take – the kind of piss taking television roundly deserved back before the internet finished the job.

So fast forward to December 2017 and you’ll find the new series of Black Mirror has landed on Netflix. Brookers own take on The Twilight Zone gives a new audience the hell ride of their life as they start to wonder if all this technology is really worth it after all. Black Mirror is a dystopian serial about how far we can take technology, and how far technology can take us to the brink. While previous seasons of the excellent show have felt like holidays into misery, we were often comforted with the knowledge that it’ll probably never happen. In 2018, though? Well, it feels less like misery flavoured fantasy juice and more like grueling reality porridge that tastes like rat poison and sadness. The unending misery of Black Mirror is well known, obviously, and most folks clued into the show are well aware what they’re in for. Sort of like a really, really safe GG Allin concert but, y’know, actually good. The thing is, this was questioned in season three with the stunningly beautiful San Junipero episode – where Brooker sought to avoid the nihilistic cliche that Black Mirror was slowly becoming – and it did. Surely with a realisation like that, and by Brookers own admittance, season 4 would follow suit?

Well… Sort of. Generally speaking, season 4 is every bit a broken window dystopia as season 3 although this time it contains even less respite for the human race thanks to the boiling cauldron of piss that was 2017. In Season 4 we have to deal with invasive brain chips that allow parents to spy on their kids, machines that can read every thought a human has ever had and mechanical murder dogs that use clever AI to kill every last human alive. As is the case with previous seasons, each episode is a finely crafted slice of brooding ‘what-if’ scenarios that, once collected together, feel a bit like a collection of short films. However, the thing about misery is, like any other creative effort, it won’t mean much if it isn’t paced to perfection. To translate: you need to build us up before you knock us down. And while Brooker promised this season would ease up on the misery whipping, it doesn’t entirely shake it off.

That said, Brooker and Netflix have definitely given it the good ol’ college try with not one but two whole episodes that don’t end in a shower of nasty human suffering. And you know what? They’re the best episodes of the season. Needless to say, there be spoilers amongst these minuscule capsule reviews:

An interesting placement for this particular episode, as it does it’s darnedest to convince you that Black Mirror has totally sold out and become a by-the-numbers family-oriented science fiction adventure. The twist, though, is that the gaudy heroics is the male power fantasy of one man. By creepily collecting DNA samples of his co-workers, he’s able to digitize his otherwise clueless colleagues into an unbelievably grand space MMO created, in part, by himself, at his day-to-day job. Not only that, but he’s modified his game code to represent an old TV show that is strikingly similar to Star Trek in the 1960’s. The interesting twist here is that it clearly highlights the older Star Trek TV series for what it is: an overly simplified power fantasy where the hero is always one human male – every single time.

There’s a great performance here from Michaela Cole (of Chewing Gum fame) who plays a kind of warped version of her twitter persona: A chatty, scathingly witty jester who provides the office with many of this episodes biggest laughs. On top of that, Jesse Plemons is great as the bookish yet creepy loner Robert Daly, the man who’s helped create the worlds most immersive MMO video game. Jesse almost plays two people in this episode – the man who sheepishly squeezes his way around an office environment that he’s clearly not respected in, but also a megalomaniac that has an unnervingly tight grip on his digital puppets.

This was a really unexpected start to season 4, and it needed it. The Netflix show has a gigantic reputation behind it – throwing a curveball at the audience was a smart way of soothing audience expectations. It also takes a clean swipe at male-dominated nerd culture by acknowledging (but also celebrating) it’s sheer mind-blowing craziness. The episode ends with the digitized crew having vanquished their dictator and finally being allowed out of the confines of Roberts machine and onto the internet at large. After the crew has abuse hurled at them by an anonymous American teenager, they share a smile; the unknown wild-west of the internet finally at their feet. They’re free. 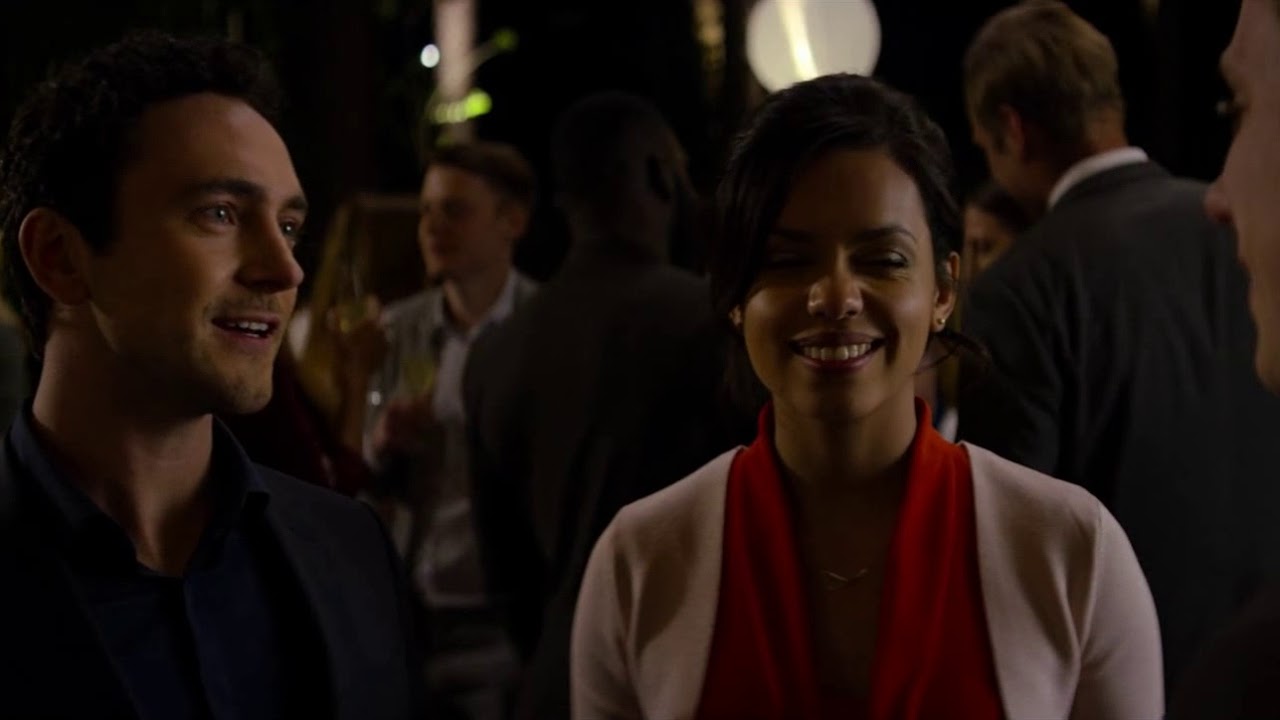 This episode introduces us to Amy and Frank – two 20-somethings that have elected to be part of a dating program that places an expiry date on each match. On their first date, they’re given a measly 12 hours together. Under the assumption they’ll probably never see each other again they figure “what could go wrong?” and throw caution to the wind for the evening. But when the 12 hours are done, they realize they have more in common than they initially thought. This sets off a pattern of questioning the program, and indeed “the hub” that they now live inside, leading to the twist towards the end of the hour.

Amy (Georgina Campbell) is played with affable warmth and seems to be a perfect match for Frank (Joe Cole) who is similarly lovable and hard-to-dislike, though, the great thing about Amy and Frank is that there’s an element of frailty to everything. Even the moments of backslapping banter and name-calling are tinged with self-deprecation. We’re aware all the time of their insecurities, subtly revealed in tiny ways by both the actors and Brooker’s excellent writing. Not only that, but Georgina Campbell and Joe Cole have instant, magnetic chemistry on screen, so much so that it’s hard not to enjoy their burgeoning relationship.

There’s a lot more laughs in this episode and thank God because the episodes preceding this really leave you feeling hollow. Georgina Campbell and Joe Cole carry this weight on their shoulders effortlessly, bringing a much-needed breath of fresh air to the otherwise morose season of horror stories. There’s also a great twist to this episode – the program is nothing more than an app on a phone. The program, in reality, is an algorithm to match potential mates together in the real world and the matches are based on who questions the system operating within “the hub.” This is a great episode because it questions our relationship to technology without scaring the living daylights out of the viewers. Much like the San Junipero episode from season 3, we’re given the happy ending we craved, and the episode absolutely succeeds as a result. At the conclusion, Amy and Frank spot each other across a crowded bar and, presumably, begin their relationship, together – face to face and in living colour. Away from the black mirrors of our phones.

That’s not to take away from the latent misery in Charlie’s work. Indeed, misery, dystopia, morbidity, pathos – many of these emotions are powerful and feature in Brooker’s work for a good reason – he knows how to tell a sad story. The final episode of the season, for example, is an excellent foray into revenge and race politics (the first time it’s explicitly handled in the show’s history) and its a resounding success – it just helps sometimes to have a build up on the rollercoaster before you send us hurtling down into hell.

There are no clear plans for Charlie Brookers next move, especially as he’s hinted that he might be done with Black Mirror for now. However, the time is ripe for Brooker got his hands dirty with more on the nose satire again – much of his linguistic strength lies in his scabrous absurdities and at a time like this, it’s sorely missed. In the meantime, we can sleep easy knowing that Charlie has produced some of the most beloved and challenging TV in years and that a picture exists of the man himself sticking a fork in his buttocks. Happy days.