“The only way to stop a bad guy with a gun” according to the NRA’s Wayne LaPierre “is a good guy with a gun”. The executive vice president of the NRA said that the last time a school full of children was shot dead for no reason and he said it again, today, breaking his week-long silence since the deadly shootings on February 14th. Unbelievably, LaPierre is a college-educated full-fledged adult who really said this nonsense to a crowd of clapping, hollering yes men. Twice! Despite the obvious leap of logical faith it takes to believe such a thing, he has somehow managed to pen six whole books – They may not be worth the toilet paper they were squirted on to but he’s still written more books than most people, which is enough for dense people with even denser pockets to give him money to be their mouthpiece. But having a big mouth and an ounce of knowledge – in our world – is often all you need.

As the executive vice president of the National Rifle Association he has a worrying amount of swagger and authority over the direction of the worlds largest superpower: it’s no secret that the NRA’s donations to the Trump presidential campaign reaches almost $30 Million and that the NRA themselves receive some incredibly substantial financial backing from “everyday citizens” but what’s really scary about Wayne LaPierre is how comfortable he felt giving his gun manufacturing millionaire buddies a rejuvenating pat on the back at the Conservative Political Action Conference only a week after all those kids in Orlando selfishly jumped in front of a lunatics gun barrel and got themselves all shot to death. Really, what were they thinking? Now the arms industry has to be responsible for once. Oh, the humanity.

Normally, people speaking this way are naked and masturbating on public buses, before being arrested and beaten up in jail. Men like this are typically found smashing their forehead against a padded cell and shouting racial profanities at nurses going about their daily rounds. You may occasionally encounter verbal-rabies like this with drunks at bars who haven’t been home in two weeks. Yet here we are – in 2018 – with another dangerously reckless man speaking from a position of vast cultural importance to almost nauseating effect. LaPierre rearing his ugly head at a time like this is about as welcome as a rape joke in an obituary but 2018 loves to twist the knife in all manner of new and exciting ways.

Despite the nascent ugliness of LaPierre’s comments his existence is an important waypoint for the gun control debate and Trump supporting Republicans at large – if this is how respectful they can be in the wake of a horrible tragedy then, well, let’s just hope we never catch them on a bad day. LaPierre (and men like him) prove how shallow humanity can get when there’s a sudden whiff of flames licking around the ankles of a few powerful people’s bank accounts.

Reading about the unfolding terror in Stoneman Douglas High School was, at this point, worryingly normal. We’ve seen this before. It unfolded in mobile phone footage, captured by terrified students gripped with fear. It unfolded in front of journalists, their cameras capturing sobbing students, clambering on to each other with grief. It captured mothers and fathers who now must summon the incredible emotional strength to bury their children in the ground. It was all too normal until the survivors of that day started to come forth in protest, urging politicians for better gun control. Anyone would be forgiven for spending weeks in bed curled up in a ball of unashamed misery but yet these 14, 15, 16-year-old kids have the bravery to stick their flags in the dirt and demand a better world. At this point, Dana Loesch, a spokeswoman for the NRA, bravely defended freedom by saying the media “love mass shootings.” 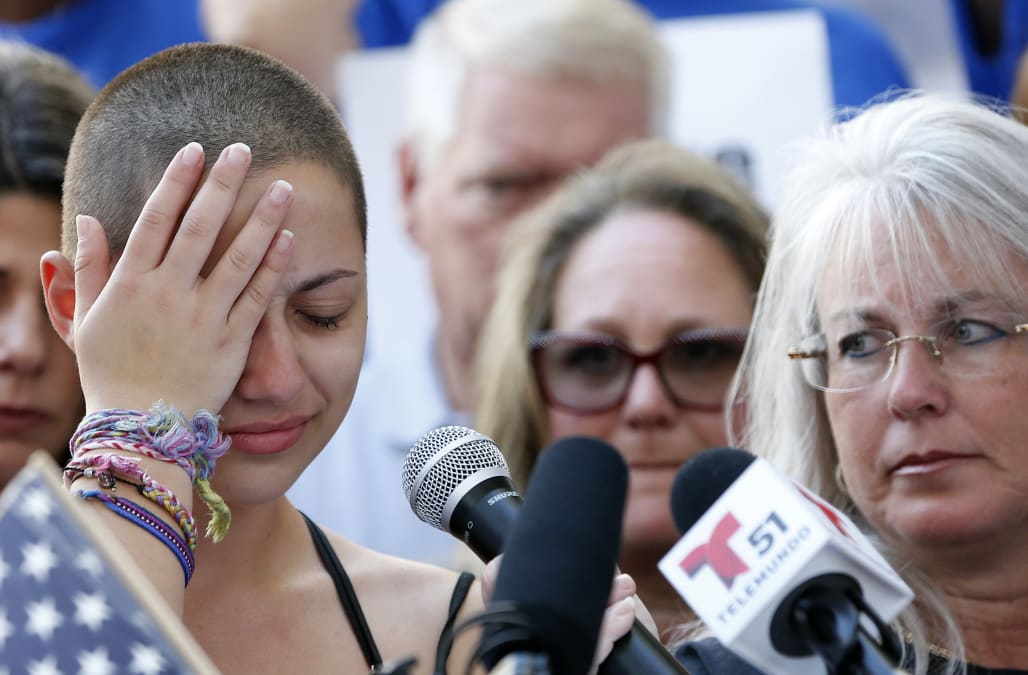 The young students protests stand in stark contrast to the grim world of paranoia and fear that the NRA sincerely believe in. In the same CPAC speech, LaPierre rattled off paranoid nightmare scenarios right out of the video game Fallout 4 where rapists and murderers live around every corner, an epidemic that can only be solved by sudden and swift execution by way of your very own AK47. Luckily for the sane people of the world, his miserable worldview hits with about as much resonance as a hammer striking wet grass – The groundswell of support for the victims of the shooting and their subsequent protesting, in reality, has men like Wayne LaPierre scared out of their socks – and that’s why they’ll win.

Going after someones bottom line is usually when heads start to roll. Take a look at the pipeline of support the NRA has constructed for pro-gun Republicans. it’s hard to ignore the cold hard truth – that this isn’t about individual freedom. This isn’t about democracy or Libertarian values. This is about LaPierre’s neighbor and his big house. This is about his millionaire buddy that just got a yacht on the south of France from all of those AR-15 sales. This is about the men who believe the price of 17 dead teachers and children is acceptable to sustain their bottom line – and now that the bottom line is feeling the heat, they don’t like it one bit.

The bad guys will win this one, sadly. That’s because they’ve got a solid strategy. By wrapping up gun ownership in Libertarian values they have irreparably linked gun ownership to freedom. Like those devil dogs from ad agencies in the 1950’s who found a way to sell cigarettes to smoke-free women, they’ve done the impossible by sewing up everybody’s favorite political buzzword to owning a gun: freedom. After all the empirical evidence has been collected, after all the real-world, practical examples of gun control has been poured over, after all the societies on earth with low gun ownership has been analysed with a magnifying glass… Owning a gun means American freedom – and only a monster would ever want to take that away.