I was never a Star Wars kid. To me, it’s Sci-Fi trappings always seemed hokey and slightly preposterous – it’s supposed to be, of course, but to a child like me, I had been bitten by the roguish charm of Indiana Jones. Evil Nazis, skull encrusted tombs, demons and monsters, that whip, that hat? I was utterly, hopelessly obsessed with Spielberg’s romantic re-imagining of adventurous archaeologists from the 80s, so much so that I used to sneak out of the house and visit the neighbours who I knew had a copy on VHS. Nowadays, I’m a slightly bigger kid which means that anything that even remotely broaches the topic of the romantic adventurer almost always sets my brain on fire, giving me the ability to live vicariously through these lovable rogues. Nathan Drake did it perfectly. But now there’s a new take on that idea: It’s La-Mulana 2.

I’ll admit it up front – La-Mulana 2 defeated me, much like its predecessor. It’s a metroidvania that is as much about solving riddles as it is platforming and fighting. But here the riddles are stretched over the course of the game – a sentence etched on a stone in the early portion of the game can become vitally important later. Every screen of every level has some degree of important information on it that pertains to something else in the game. When you add up all the screens you visit in the dungeons of Eg-Lana that’s a lot of information to keep track of. Puzzle solving here is no joke, as is the Soulsian boss fights and the slow, methodical pacing of weapons and skill upgrades.

And it’s okay that it defeated me – Many games’ journo’s often discuss the importance of finishing a game before reviewing it and, well, yeah, that makes total sense. You can’t just… walk out of Terminator 2 at the halfway point and proceed to review it. But with La-Mulana 2, this is such a vast undertaking as a game, such a huge investment of time and resources, that I am admitting defeat: It was just too much of a monster in the end. I had to tap out.

Despite that, I commend La-Mulana 2 for having the balls to put its players through the rigours of real tomb raiding. The kind of tomb raiding that involves several hours of a nose being buried in a book. It’s not all about swinging on a rope, shooting the bad guys, and escaping with the loot. As much of La-Mulana 2 is played outside the game as it is inside it. You’ll be gathering data on a per screen basis, collating it in a spreadsheet and keeping tabs on the locations of everything. You might think that sounds obsessively mad but I promise you it’s nearly impossible to beat this game without making notes. I had a Google sheet, 10 tabs long, utterly filled to the brim with every piece of information that you could possibly need. This is where the real exhaustion takes place.

You will need it. Because La-Mulana 2 isn’t afraid to dump some seriously vital, game-winning information behind a fake wall in the first map that will be of life or death importance in the closing moments of the game. You’ll often headbutt a brick wall, unsure of where to go, trawling over the games maps trying to desperately find some detail you missed, some vital button you didn’t press, or some shred of evidence or information to help you. Dark Souls was a game that took the metroidvania and forced the player through tear-soaked trial by combat – uncompromising punishment where death was your only lesson. La-Mulana 2 isn’t quite the existential trial by fighting that Dark Souls is, but more of a methodical researchers fantasy come to life. This isn’t strictly a metroidvania, it’s a cold case, a murder with no leads and you’re the diligent archaeological detective gathering every nano shred of information to unlock the truth. Every single minute of the game is spent sleuthing it up. As Indiana Jones once said: “Seventy percent of all archaeology is done in the library.” La-Mulana 2 is the logical end result of that idea. That’s not to say developer Nigoro pulled their punches in the exploration or fighting departments. The small array of weaponry that becomes unlocked over the course of the game have a very Soulsian variety to them. They all have strengths and weaknesses and often, no one weapon is your fix all solution. They’re extremely situational. And exploring, too, is given the Dark Souls treatment, too. When you do actually figure out where you’re going, the eureka moment you have is glorious, wide-eyed triumph made all the sweeter by your own diligent data gathering.

There’s some regrettable cringe-worthy moments, though, and they’re bizarrely included in a game where you play a female protagonist. One of the games main characters makes not-so-subtle suggestions of the main character joining his boudoir of sex workers rather than risk going it alone in the depths of Eg-Lana because of course a woman would rather do that, right? There’s “slave” characters in the game, too, fairies that are victims of human trafficking, and when you finally meet one, it appears to be written in preposterously exaggerated black dialect, speaking in heavily exaggerated ebonics – something I’m sure BAME players would be less than thrilled to see. It may not dissuade you from playing the game, and indeed it didn’t put me off too much but for a game that’s about careful research and putting your puzzle solving skills to the test, it seems totally out of place.

The famed difficulty of La-Mulana 2 becomes something of an albatross around it’s neck, though, as keeping track of so much information makes it nearly impossibly to retain any sense of passion for the game beyond the 25-hour mark, which is a shame. I racked my brain for hours trying to think of ways of ensuring players would be able to finish the game without this much fatigue that wouldn’t involve cheapening the difficulty of its puzzles – the only conclusion I can come to is that I wished there were better tools within the game for keeping track of information, better ways within the game for players to work out the puzzles without having to laboriously make notes on their own outside the game. The game lets you save some amount of information to an in-game laptop, so why couldn’t that be expanded even further? A way of drawing on the in-game maps, a notepad function – anything, I think, would have alleviated that exhaustion that I think is impossible not to feel. 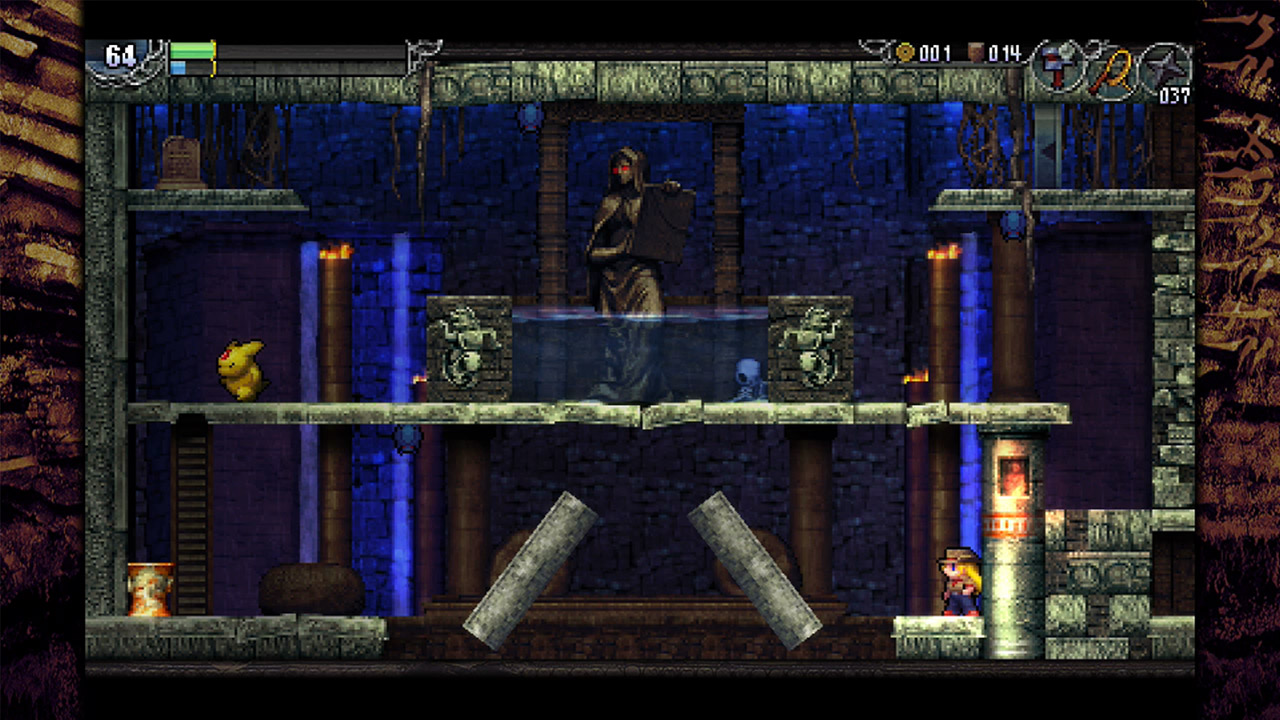 Regardless, La-Mulana 2 is a daringly uncompromising approach to Metroidvanias. In a genre as stale as this, it’s great to see an insane indie developer somewhere churning out these idiosyncratic dungeon crawlers and it fills me with joy. They will drive you mad, of course. The difficulty comes not from combat or exploration but in the homework that surrounds the game, in the moments where you’ll be slamming your head against the wall trying to figure out where to go next. For me, it was a little too much to take, but I think that only adds more mystique to this most mysterious of games. La-Mulana 2 is so unique that I recommend it despite those issues and problems. And in an industry as homogenous and risk-averse as video games, something different goes a long way.