One day, all of this will be gone. When the great nuclear war of 2019 incinerates everything you love, when the wind passes over our scattered bones, when all the cars and stadiums and pubs and high-rise flats are nothing but skeletal ruins, planet earth might start to look awfully pretty again… after about a hundred years. But if post-apocalyptic dinosaur murder simulator Horizon Zero Dawn is anything to go by, it’ll look fabulous.

Try, if you can, to ignore this game’s awfully generic video game title because Horizon Zero Dawn bills itself as a robotic Monster Hunter by way of post-apocalyptic Assassin’s Creed, complete with big towers to climb, a map rammed to bursting with cookie cutter icons and, of course, dinosaurs – big mechanical, robotic dinosaurs. Dinosaurs of a variety of sizes. Dinosaurs that are more than happy to rip your freshly ironed hunting outfit into embarrassingly ill-fitting rags. Horizon Zero Dawn also sports a sleekly designed visual aesthetic that pours all the beautiful primary colours back into the oft-explored video game cliché of post-apocalyptic America. Gone are the muted greens and greys of Naughty Dogs fungal zombie armageddon and gone too is the dreary brown rust of the Fallout series – Horizon Zero Dawn splashes so much colour on your TV you’ll think the game got stuck in a bomb blast at a paint factory. And despite the terribly corporate name, Horizon Zero Dawn really does horizons justice, with some of the games most beautiful vistas found standing atop the crown of a hill and peering out to the great beyond – with sun reflecting on the still surfaces of water and sunsets bathing a variety of locales in an intense, warm glow it’s hard to think of a better game to showcase the horse power of even the standard, non-pro variant of the PlayStation 4.

The red-headed protagonist of Horizon Zero Dawn is as attention-grabbing as the scenery she clambers over. Introduced to you as a gurgling, cooing newborn, Aloy grows into a stubborn young girl before coming into her own as a fully fledged parentless adult. The question mark over her own heritage sets Aloy’s story off to a flying start and has your eyes eagerly glued to the screen for the duration of the hour-long introductory sequence. Aside from some slightly terrible dialogue, the initial foray into this new world is expertly paced and manages to avoid the usual pitfalls of most open world protagonists who are too often utterly bland and devoid of personality. Worryingly, though, Aloy seems to rely solely on this narrative enigma as the only interesting hook – after the eye-dampening opener, not much else happens to the plucky red-headed warrior as she plods along the expected open world story beats, bumbling her way from quest to quest; Go here, kill that, collect the reward – Rinse and repeat. The unfortunate genre baggage seems to reveal itself a little too soon after the opening volley of tugged heart strings and as a result, the experience quickly grinds down into the nitty gritty of icon hunting on the games huge, expansive map. Not only that, but a needless crafting system is awkwardly crowbarred into Aloy’s inventory which requires the player to sift through the rubble of resources that clutter the eye-watering beauty of this world in an effort to make a slightly bigger bag for your arrows, potions and assorted hunting trinkets. Having been released around the same time as Breathe of the Wild, this kind of resource gathering and lazy filler immediately looks dated next to Nintendo’s revolutionary take on the exact same formula.

Luckily for Horizon Zero Dawn it’s overflow of samey content are much less egregious than Ubisoft’s most infamous offenders and what saves the game almost entirely is the brilliantly executed combat system. As with everything these days, it takes one or two cues from Dark Souls by ensuring the games larger robotic foes will happily take you down a peg or two if you play the game a little too arrogantly. It’s not precisely the morose treatise on death and dying that the Souls series is, but if you’re not watching your back expect a swift kick in and around that general area. Bigger enemies are almost organic, roaming boss fights, ones where planning ahead and laying a devious series of traps will go a long way in ensuring success. Fighting will involve lots of dodging and ducking, frantic dashes across open ground before sliding on your knees into cover and waiting for the perfect moment to strike from the tall grass and bring a metallic beast down in a sparkle of electrified energy. 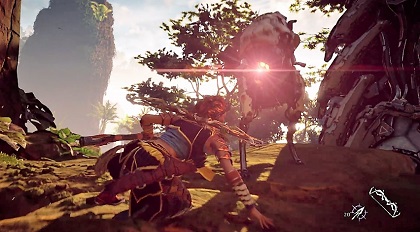 When it gets up to speed, it almost feels like a sort of precarious form of dancing except if you miss a beat you’ll be more than a little embarrassed. Each beast has specific weak points and are susceptible to certain damage types which mean you have to rely on more than just nimble fingers to survive. Tactically lopping off the offensive capabilities of a huge mechanical beastie is often the smartest way to do things, allowing the player to approach each combat challenge in a genuinely thoughtful way. If it wasn’t for Aloy’s inherent agility then Horizon Zero Dawn would skirt relatively close to Monster Hunter territory except here you can’t wear the skin of your enemies like some sort of morally devoid lunatic. Instead you’re a hunter-gatherer in the more sociological sense, and what better way to turn that cliche on its head than to have a strong, stubborn female leading the charge as a brash robot dinosaur slayer?

Horizon Zero Dawn works best when it has its finger on the beating pulse of Aloy’s identity problems, and though it doesn’t quite dig deep enough to rise above being an empty platitude, the mere presence of it is welcoming enough. Combine that with the gorgeous waterfall of colours that make up Aloy’s playground with the energetic dance of death that constitutes each combat encounter and you’ll experience an expertly crafted Open World adventure that, while entertaining, sadly tramples on its own fascinating premise with thoughtless, copy-pasted filler content. That said, however, Horizon Zero Dawn is a big hearted game where a brazen, firey woman takes charge and leads the pack. It’s not a manifesto by any stretch, but in a culture as barren as gaming, I’ll take it.