It’s a little cliché to make the comparison but the zombie game now resembles its own brain-dead hosts. They’ve gathered en-masse in large numbers, they’ve shuffled aimlessly in unison with one another, with little to no difference between each other, and they swarm around the warm bodies of healthy, living beings, and chew our bodies until we die. By today’s standards, the zombie game is as common as the World War Two shooter was at the turn of the millennium and the high-octane, catchphrase based FPS’s in the 90’s FPS’s. Zombies are now our de-facto copy and paste villains

Amongst the initial onslaught of the terrifying, shambling horde was Dead Rising – an oft-beloved zombie game about time management, inventory management and infuriatingly stupid NPC management. Dead Rising set many hearts on fire with its unique blend of silliness and gory zombie dismemberment and it swept in on the cusp of the new generation of console gaming. The Xbox 360 and Playstation 3 were about to usher in a golden age of new creativity and they brought in a quantum leap in visual fidelity as well as a higher quality of experiences thanks to greater hardware specifications crammed into those tiny boxes. Leading the charge were, what we now recognise as some of the most memorable games of all time: games like Bioshock and Grand Theft Auto IV represented not just a graphical shift but also a very clear line in the sand between harmless games of yore and mature, grown up games of now. The industry was saying we can be clever, too and Dead Rising arrives awkwardly in the middle of this innovation as a somewhat quirky outsider. One foot in the past, and one in the present.

Sadly, at the time of its original release Dead Rising had totally eluded me and I was happy to ignore what I mistakenly considered something rather generic. it wasn’t until the excellent sequel on PC that I got my first taste of peculiar, cross-dressing zombie slaughter. Dead Rising 2 proves you shouldn’t judge a book by a cover and I found myself enamoured by the ludicrous slapstick humour which seemed to awkwardly clash against story of conspiracy theories and widespread social panic. I would often pinch myself to make sure what I was looking at was really happening. I mean, did I really just carve a zombie in half with a medieval sword in nothing but a dress? And now the protagonist appears to be proudly sporting a dinosaur helmet while cradling his zombie infected daughter and wiping the tears away from her cheek. The mall was besieged by psychotic loonies, the sort of loonies that donned their previous occupation, and now was exaggerated to delirious fervour, and this was presented to you as logically as anything else in the game. I loved all of these strange idiosyncrasies and I came to realize that Dead Rising 2 wasn’t just a generic cut-and-paste zombie game, it was actually a delicately crafted, Romero-inflected game design gem, which seemed to wear all the typical zombie trappings on its lapel but was actually masterfully paced. It brought together a gaggle of intentionally awkward design choices and somehow made them work.

Dead Rising then is obviously cut from the same cloth, although now comes in a beautiful 1080p visual upgrade (it also goes up to 4k!) and runs at a silky smooth 60 frames per second. A welcome upgrade from the Xbox 360 original. The quality of the port here is not to be disputed: Playing a game this old with brand new modern PC goggles on is a very welcome addition. Mouse and Keyboard is perfectly well integrated, as well as the original controller support, and the game can also now be played up to 4k resolutions. Ports of Japanese games have had a somewhat tumultuous history on PC, but nonetheless there is nothing to be ashamed of here: Dead Rising runs like a dream, now, on PC. 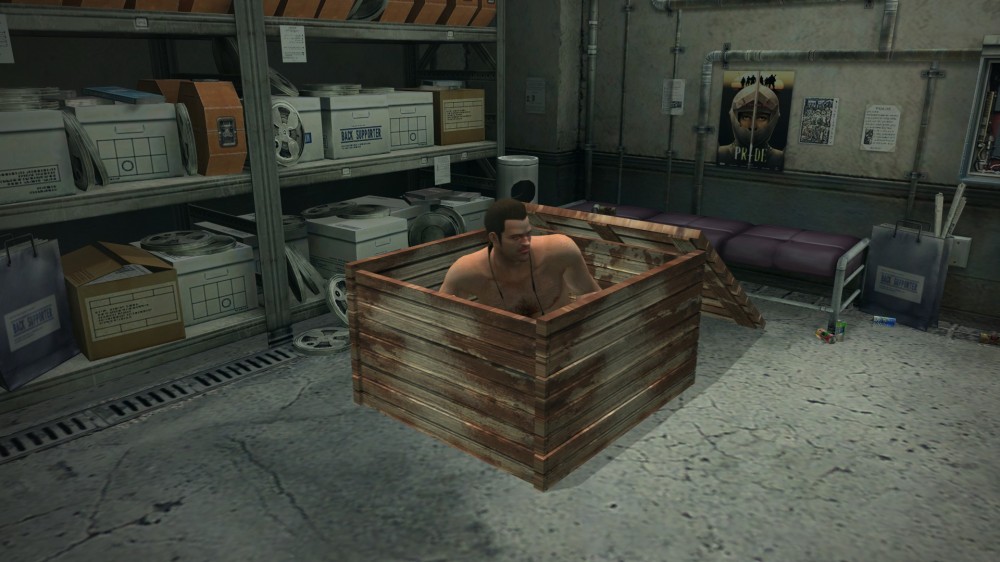 In the first outing of the series, you play as Frank West, a cocky, opportunistic photojournalist looking to cash in on the zombie tragedy of the town of Willamette armed only with a camera. Almost immediately you’ll be introduced to the slow, dreaded ticking down of the clock, to the delirious villains and their completely broken psyches. You’ll soon be acquainted to the famously diabolical NPC AI. In fact, not much of the game has changed from the original release of Dead Rising on the Xbox 360 despite the obvious quality upgrade. As a fan of the second game in this series, this is mostly music to my ears, though I do think it’s somewhat of a disappointment that the woeful NPC AI that I’d heard so much about hasn’t been given a logical upgrade. Moments where your dim companions stop to admire their surroundings as a zombie is about to bite through their eye sockets happen far too much and no, it isn’t really that charming, it’s just totally infuriating. A moment of particular frustration happens after a boss fight with a psychotic mall cop where you have to successfully lead not one, two or three people back to the safe room, but four whole dim-witted computer controlled characters, all of which make it their mission to upset your goal of saving their lives as soon as is humanely possible. You could argue that having a few of your new survivor pals die horribly in your care adds a lot of heart stopping drama, and it does, but is it really that dramatic when they die because their pathfinding is just so mortally wounded? I could have avoided quite a lot of unnecessary deaths, and having to cope with terrible pathfinding felt like artificial difficulty hikes cruelly implemented by the developers. This is something cleaned up in the excellent sequel and the challenge and difficulty doesn’t suffer at all – in fact, it improves it.

There’s inconsistent boss fights too that slightly mar a classic experience. Some are painfully easy, requiring you to simply dodge their predictable attack patterns. But others (like the escaped convicts that troll the garden area) offer a level of artificial difficulty that just isn’t a lot of fun. It’s strange that the boss fights are so up and down when the rest of the difficulty elements are pulled off so extremely well – Frank begins the game as a completely underpowered loser, an opportunistic grave digger seeking to turn the zombie holocaust into a compelling news story. He lurches slowly through the swathes of zombies around the mall, his attack damage is low, he doesn’t know how to move around the world properly, and none of the shortcuts are available early on. But as you level up and get more powerful the experience slowly begins to feel fairer. You start to believe you can actually beat this thing, and this does something in games that I love; it contextualizes failure. It gives death a meaning, and makes your struggle all the more meaningful to you, the player. So, then, the story of the game quickly becomes your rise to power in this hostile world. As irritating as a few inconstant boss fights are, I wouldn’t let it hurt my enjoyment of this wonderful series of games.

The story is a whole lot more serious than the Dead Rising 2, though not without some unintentionally goofy one-liners from our hero Frank (“I’ve covered wars, you know”). I have a hard time narrowing down exactly why this is. Part of me concludes this is something lost in translation, but the other part of me thinks the developers are knowingly winking towards the audience, almost as though they know how goofy this all is, how silly it is that Frank West’s obsession with the scoop of the century is almost completely undermined by the fantastic hot pants and crop top combo he wears while chatting away to the cast of the game, outfits which also carry over into all of the games (extremely well made) cut scenes. I’d like to think that they know…

I haven’t even discussed how refreshing it is to explore a small, restricted open world environment, and how that feels like such a breath of fresh air ten years on in a world where procedural generation actually makes games feel much blander, where open worlds are a mile big but an inch deep. And I also haven’t mentioned how much fun it is to experiment with the large variety of weapons scattered around the mall. These are all things you’ll need to experience yourself, and I’ve yet to see a person not crack a smile with a Dead Rising game as they desperately try to clock a zombie with a giant lipstick prop, or attempt (in vain) to kill a zombie with a nerf gun. I find the mall to be such a delight to wander around;  it’s so easy to get side tracked by all manner of weird and wonderful locales and shops and bistros and cafe’s and cinemas and . . . well, you get the picture. This place is wonderfully realised and time has certainly been kind to the visual design of the mall. Proof, if ever you needed it, that good art design trumps graphical fidelity every single time.

Going to Willamette with Frank West has been a blast. While I certainly think that Dead Rising 2 brought in some essential quality of life changes that make the game a lot more playable, I cannot deny the lure of the unique game play loops Capcom seemed to establish with Dead Rising 1, even in its initial inception here. What should be a game of seemingly unbelievable inconsistencies in reality ends up winning your heart with its hilarious slapstick design. When you take into consideration that this is a fantastic port, running up to 1080p and above at a silky smooth frame rate, it’s really hard to not recommend this to absolutely anyone. Don’t let the shambling spectre of zombie games fool you – this is a treasure trove of irresistible idiosyncrasies.