The War Epilogue is a series focussing on the Metal Gear Solid Series, from 1, through to 4, in release date order. I’ll analyze where the series used to be, all the way up to where it went, and the themes that lay behind the games. Metal Gear Solid, much like it’s creator, is a larger than life series with layers of complexities that flood the veins of gaming culture, even to this day. With the controversial final entry The Phantom Pain firmly lodged in my mind, I will journal my experiences with these groundbreaking, genre-defining titles having never played a single one. Currently, I am tackling the first Metal Gear Solid game…

As a writer, and specifically, a writer of games and gaming culture, I generally regard expectations as a bad thing. Expectations can give you a false impression of a game before you’ve tried it. You can think a game is better, or worse, than it truly is and until you actually get it in your hands to touch and feel, the game presented in media and in trailers should be treated with wary scepticism. I remember thinking The Last Of Us looked terribly dull in promotional material, but when I actually played it years later it completely blew me away. I tried to manage my expectations for MGS1, but alas, my love of the final game in the series somewhat side-tracked my noble efforts. Being the first 3D metal gear, I expected everything to firmly reside in ‘uncanny valley’ territory. That strange netherworld between the mid 90’s and the millennium where gaming was still too new to fully utilize the 3D spaces that were, by that time, becoming more and more ubiquitous and omnipotent. Early expeditions into the 3d world often feel half-baked in retrospect and feel more like experiments in perfecting 3D game design than actual enjoyable experiences – similar to what is happening with VR right now.

Metal Gear Solid 1 came out roughly around the time of this strange developmental period and I half expected it to follow suit. I was expecting a wonky attempt at dragging Metal Gear into 3D land with mixed results, or for the game to feel so unsophisticated in its old age that it would look outdated by today’s lofty standards. Well, in reality that’s not strictly the case. I’m somewhat surprised, because MGS1 is surprisingly well rounded for what it is and despite its relative primitive design it does a number of things extremely well. And I’m not just saying that because it’s considered one of the most influential games of all time – this isn’t Stockholm syndrome. I would say the same about Ocarina of Time if I’d played it today, or Super Mario 64, Banjo & Kazooie. When a game has that timeless quality, it’s because it has a design that stands for generations, so it’s great to see Metal Gear Solid 1 still feel so eminently playable and fun. Not only that but the game transitions to 3D incredibly well and does so by not over-extending itself. It maintains the classic isometric viewpoint from the old MSX originals (albeit in nice pixely PS1 era 3D graphics with wobbly wall textures and blocky character models) but allowing snake to switch to a first person angle to easier survey his surroundings at the drop of a hat.  It curiously decides against the fully fledged 3rd person perspective we’re used to seing with the series but they somehow make it work.

Something I really like about Metal Gear Solid 5 (which is present here) is that the game is really tightly wound. By that I mean the controls feel exacting and precise, a trait that remains a constant thread through all of the games, and while Snake’s repertoire of moves are limited inside Shadow Moses, what is there is really well balanced and feel purposeful. There is no wasted movement here, despite its simplicity. Shooting is a simple affair, which is fine, though the simplicity occasionally cripples the amount of control you have over Snake. For example, generally speaking you shoot by either pressing or holding down square and Snake will automatically lock on to the nearest target and shoot. Simple enough. But when you’re being chased up a comically exhaustive flight of stairs by more than 3 soldiers and try to swing around and engage in a gunfight – it’s hilariously stiff looking – a sign of its age, surely. Thankfully even Kojima must have seen the fault in this as pretty much every MGS game after this had manual targeting of some kind. Lord bless you, Kojima. 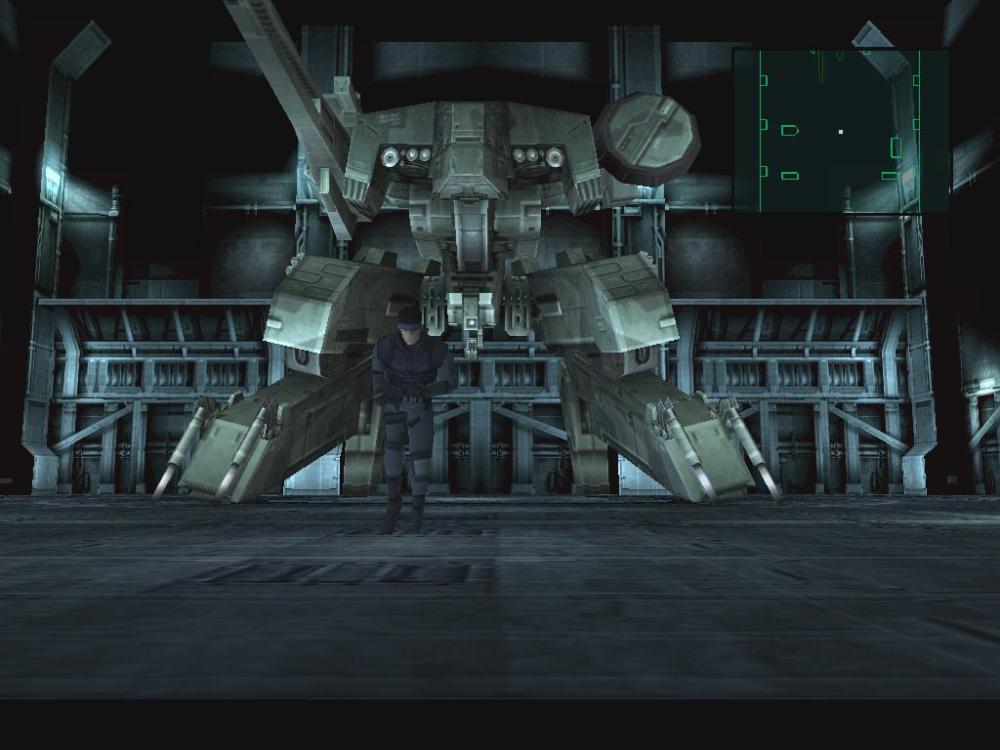 The strange thing about MGS1 is that its traditionally known as being an early forefather of the stealth genre, a title shared by the likes of Thief, however it seems to have far more in common with Resident Evil than any kind of sneaking game I’ve ever played. Most of the game so far has consisted in exploring the base of Shadow Moses, picking up inventory items, ammo, weapons, keeping a keen eye on your supplies and avoiding any contact with enemies and not to mention that fixed camera angle. You start the game with an limited health pool meaning your engagements have to be done with extreme care and attention. Being spotted by a soldier usually spells your demise: alarms trigger across the map and soldiers soon pile in on the action like clowns falling out of a car. Thanks to the tank-like controls it’s almost impossible to tackle them all at once and you learn to avoid combat the hard way. So far, MGS is what I would call a “stealth flavoured” survival game, with inventory management, fiendish level design, and overpowered enemies that can easily surround and kill you.

This eases off later in the game, though. It becomes all too easy to run around with your silenced pistol and shoot people dead rather than sneak around and not be seen. That doesnt seem terribly stealthy to me, and that’s even before I mention the man vs helicopter rocket battle i’ve just played through. But that’s okay. The structure behind all of this is quite genius, actually, as your early challenges with the AI and the hostile environment means you eventually learn their quirks and inconsistencies. You begin to realize you can actively work around the short comings of the AI and use the terrain to your benefit. You learn what the game isn’t good at as you play, and it feels quite intentional. I like that a lot – being given a rule set to adapt to is clever design, and it shows the designers trust the intelligence of the players in their games.

So far, i’ve enjoyed the hell out of Metal Gear Solid, and I feel quite surprised by its tight design choices. Next time, i’ll be discussing boss fights, the codec, rumbling controllers, hitscanning bullets and the woes of backtracking.