Far Cry 5 arrives at quite in interesting flash point in US history. America is simultaneously a country that is as politically conscious as it’s ever been, but also just as violently unfair as it’s ever been. With the election of Trump at the end of 2016, his banal and damaging worldview has only emboldened the political fringes of America, creating a sort of boiling point of tensions that seems impossible to ease. Among this swollen, scabby wound comes Far Cry 5 to drunkenly trip itself up over the bruises of a nation like some drunken aunt at a funeral. With the fresh wounds of Trump still visibly bleeding, this tone-deaf reading of America in Ubisofts Far Cry 5 lands with as much success as an out of tune violin.

But before your appetite is ruined, let’s get one thing straight. Far Cry 5 is a great video game. Its both a joyous celebration of open world silliness while also bucking the trend of the standard Ubisoft open world shooter. It’s a mixture of shooting, looting and exploring, all brewed together with the emphasis on exploration and blowing up a lot of stuff. Edens Gate is the name of a deadly religious fundamentalist group that’s taken over fictional Hope County, Montana and they reign supreme by way of guns, drugs and scary, pretentious bible quotes. You play as a member of a team of US Marshals who’ve been tasked with arresting Joseph Seed, a charismatic cult leader of Edens Gate. In true video game plot fashion, it doesn’t go too well and you find yourself stranded in cult hell. To be un-stuck, lots of cult members have to be shot and killed very quickly.

The huge map is split up into 3 different areas, one per cult leader, with a fourth mini island reserved for the big man himself, Joseph. Ubisoft are very quick to differentiate this iteration of Far Cry from others: a voice on the radio tells you you won’t be made to climb radio towers all the time anymore. Ha ha! Oh Ubisoft, you sure do know how to tell ’em. If only you’d made that joke a few games back, eh? Still, it’s a demarcation point: this one ain’t gonna be like the others. And to most people’s surprise, it isn’t. There’s no radio towers. No map with ugly icons puked up over itself. This time the only way to discover things to do is to just get out there and explore; captured citizens reveal points of interest on the map screen, conversations in cosy American bars reveal the location of outposts and silly missions and the like. Plus you can just naturally stumble across them in the woods like discarded condoms, but less sad and ugly. 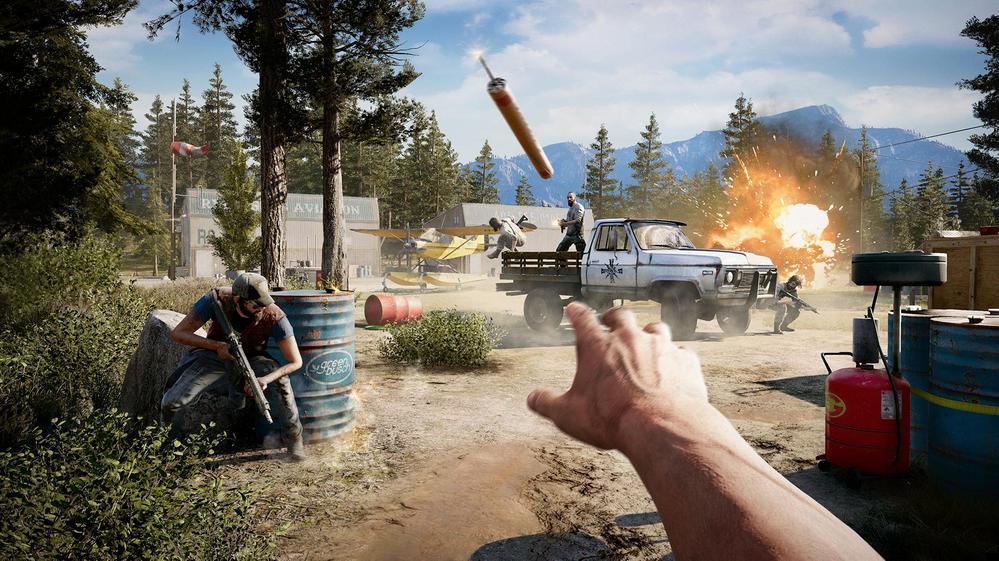 As you ‘murica your way through Hope County, your notoriety with the local chapter of Eden’s gate will increase. As it does so, the cult leader for that region gets more and more grumpy, sending bigger, badder things your way to harass your progress throughout their territory. Things like heavily armed jeeps and trucks, fighter jets, helicopters, that sort of thing. If you fill up the gauge all the way, the local grumpy cult leader will invite you to fisticuffs in their fancy underground bunker. Kill them, and you’ve “liberated” that area of the map, replacing the nasty Eden’s gate religious terrorists with good old fashioned drunken rednecks with machine guns. Hang on a second, isn’t that just as bad? Oh, we’re getting to that. Don’t you worry.

This new approach is great in terms of spicing up the standard Far Cry shooter. Clearly having their eye on last year’s Breath of the Wild, you now discover things to do by getting out of the map screen and trawling the expansive American playground. It’s gorgeous, by the way. Rolling hills give way to valleys filled with cattle and natural wildlife. Rocky mountains tower above rolling farmlands. Fields of corn sway in the breeze, silos stick out from the ground and glisten under the American skies, little American towns have cute little American bars in them, adorned with the US flags and beer mugs and inebriated locals. Ubisoft have leaned real hard on the traditional Americana visuals. This grand countryside is a marvel of beauty – it has to be to make that all important exploration feel ever more rewarding. By and large, a lot of what you do in Far Cry is similar to past iterations, just remixed. The outposts still exist and they’re still, inexplicably, great fun to play with. You still get asked to go from A to B, murder everything at B, then come back to A for handshakes and kisses. That’s not really changed. But the usual open world side quest distract-o-fest is sprinkled liberally across the beautiful map for you to go out and discover by way of machine gun plunder. You no longer feel disarmed when you open the map and see a laundry list of chores and activities to complete. Instead the map makes you feel excited. All that undiscovered space, what could it hide? You’ll just have to hop in your Jeep and find out. It’s the classic American experience, alone in the wilds with a rifle, drunk driving a jeep. You rip roar your way around lush green and blue killing fields like some mutated Raoul Duke. Great, great fun.

Among all of this is perhaps Far Cry 5’s greatest feature – the arcade. Far Cry Arcade is both a map creation tool and a wacky Garry’s Mod style hub of user created content. You can fiddle with the (surprisingly extensive) map editor or, you can do what I do and click the ‘be a hero’ button which operates as Far Cry’s ‘I’m feeling lucky’ button. For better or worst, this will plop you into a user made map at random with wildly erratic results. It’s almost always charming, though. Occasionally jaw-dropping, sometimes horrific and anti-fun. But always charming. It’ll remind you of trawling through the map databases for games like Doom and Half-Life where downloading a map was a proverbial Russian roulette of success. The result could either be good or bad, but it was mostly just… weird. Ubisofts system here is underpinned by social media algorithms, too. There’s a search function where featured or most popular maps are pushed to the very top, which is great because for the most part those maps are stunningly well made considering the tools, but for me, the real gems are the nasty, unfiltered amateur efforts. The ugly, broken messes. The quick sketches by users just trying to get their head around the tools. It’s a great, wild playground – one that Ubisoft has dedicated itself to supporting. Arcade offers a brilliant distraction from the main story out in the open world, where you’d be hoping the narrative holds up well. After all, cult stories are always fascinating but in true video game fashion, this is a dismally tone-deaf marriage of cult psychology and religious terrorism. You’re lead to believe that the religious fundies you’re trying to mass-exterminate are super awful people. And they are. They have an iron grip on the games stunning locales achieved by a mix of oppressive rhetoric, drug abuse and violence. But Far Cry 5’s response to this is more violence, but this time by drunk rednecks. By suspiciously right-wing types. The conservativism almost verges on South Park’s “dey took our jerbs” territory but it’s played for ironic laughs. In an America as fractured as the one we are currently seeing, it’s not a very funny joke.

The potential to serve up a sizzling piece of satire on American right-wing politics was right here, on the release of this game. In an industry where Grand Theft Auto is more than happy to send up US culture and politics, the time was right for Far Cry to throw their iron into the fire. But they blew it. They totally blew it. The doomsday cult is a suspiciously blank, generic group of humans. Inoffensive in their antagonism. And the group tasked with overthrowing them, arguably, are worst, but the old Animal Farm narrative of replacing oppressors with even worst evils doesn’t really work here, either. This could have been the greatest piss-take of Alt-Right politics we’ve seen but Ubisoft have hot-potatoe’d the issue in order to create an inoffensive explosion fest. The groups use all the visual iconography of modern day american politics, but it’s entirely without bite. Without wit, sarcasm. There’s no fire behind those eyes. And that’s a shame.

Far Cry 5 is still a brilliant game, even with the toothless political commentary. One that stays interesting well over the 30 hour mark, where it continues to offer up fresh, fun and explosive environments to piss about in. The Arcade mode especially adds legitimate running legs to the game and there’s no denying that this, from a gameplay perspective, is the best iteration so far of the standard open world shooter – a formula that Ubisoft seemed to grow creatively redundant on until now. Weather the bad story and tone-deaf story meanderings are enough to sour the experience is really up to the player but in and around those nasty bits, players will find a refreshing remix on Ubisoft’s now familiar formula of open world shooting.